Q: Are you serious?!

A: I guess it's only fair.  I did call this section "Frequently Asked Questions," and that is the most frequent question I get asked.  The answer, I suppose, depends on the context of the question.  Allow me to break it down with what I believe are the three most common variations of this theme.


Q: Are you seriously a rapper?

A: Yeah, why are you asking?


Q: Am I supposed to take your raps seriously?

A: Sure.  I mean, I take them seriously.  Even the funny ones.  Sometimes especially the funny ones.  I work very hard at my craft and put out the best possible music I can.  But hey!  I get it.  I don't look like your typical rapper, and I tend to wear costumes.  You just have to realize that it's part of my process.  It helps for me to go big with my hip hop persona.  And I'm not alone in that.  A lot of very famous and successful rappers apply the same technique.  In fact, finding any type of performer that doesn't change from their day-to-day personality when they perform would be quite the task.  For example, Lil' Jon isn't the Lil' Jon we all know and love when he's checking out books from the library.  You might be surprised to find this out, but Jonathan Smith puts on a costume, a voice, a demeanor - a whole character - when he takes the stage.

That's the long answer.  The short one: Typically I do go for laughs, because that's the kind of person I am.  However, many of my songs are about subjects where my passion is so strong that I write with a different feeling entirely.


Q: Seriously, how am I supposed to take you seriously?

A: That's your problem, not mine.  Moving on.


Q: Why do you use female models on your covers instead of pictures of yourselves?

A: Ah!  You're referring to Chalkskin's Dope Hunnies.  It's just something I've felt very strongly about since the first design concepts.  I am friends with so many wonderful, talented, beautiful women who do amazing modeling work, and I love working with them.  For the Hunnies, each model gets to play up a personality trait and go as big as possible.

You know what?  Let me just introduce you to the Dope Hunnies right now! 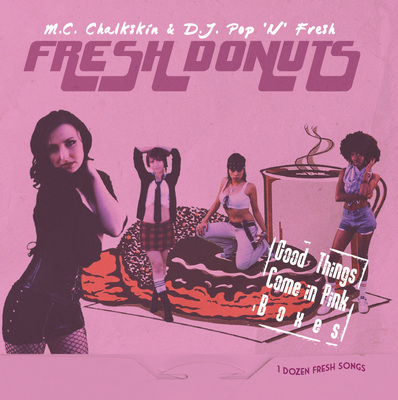 On "Fresh Donuts," we have four Hunnies!

GOTHIC HUNNIE is the stunning Angela Lynn Cousins.  She has been a professional gothic model for a long time.  In fact, when I was looking online for influences and typed in "hot gothic girl" in google, she was one of the top images that popped up.  She's rad!

SCHOOL GIRL HUNNIE is the lovely Kei Min Kim.  I found her on a modeling site and loved working with her.  She's incredible!

BARRIO HUNNIE is another friend of mine, Cristina Leduc.  She's done some done a lot of pro work.  When she isn't at the Playboy Mansion, she's hula hooping.  She's so much fun!

And HOOD HUNNIE is the gorgeous Tiffany Williams.  She's another find from online, and has been a dream to work with.  She's spectacular! 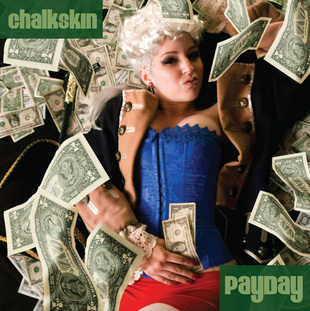 For "PayDay," it was all about the singular vision, so we got one super Hunnie for that cover!

Since the theme of that album was money, I thought it would be funny to turn a "dead president" into a sexpot.  And while it's all about the Benjamins, Mr. Franklin's hair would be problematic.  With Chalkskin, it's more fun to riff on lower denominations anyway, so why not go with George Washington?  Thus COLONIAL HUNNIE was born.

Sasha Janae Miller is another dear friend.  She hadn't modeled before, but I thought she showed a lot of potential at the "T 'n A" shoot.  She expressed an interest, and we took a chance with her.  I for one am pleased with the result.  She's great!
Doing these shoots is a ton of fun, and it's yet another great way to have talented individuals shine and do what they love.  That's what it's all about, right?

There will be more of Chalkskin's Dope Hunnies in the future.  Album covers, of course, but I'm really interested in doing a calendar someday.

Oh, and to answer the other part of your question, if I put a picture of myself on the cover, I don't think people who have never heard a Chalkskin song would buy the album.  Let them pick it up and turn it over before they realize what they have in their hand, and by then hopefully they're intrigued enough to give it a chance.